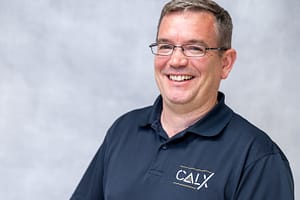 Read about how CalX Calibration Engineer Mark started his career in Instrumentation and what his average day is like at CalX.

What led to you pursuing a career in instrumentation?

I’ve always had an interest in how stuff works, playing with technic Lego or being straight in with a screwdriver when anything in the house broke as child. I further grew on this with an opportunity to go to sea most summers as a teenager, this gave me a strong understanding of various plant and machinery and the knowledge to repair, as we could not call on contractors while at sea.

I had my sights on becoming a Marine Engineer but had a change of mind and did a Diploma in Electronics and then a Degree in Product Design and Development both at DKIT. I then took on a role as a technician in Eurolec Instruments where I spent 17 years designing, manufacturing and calibrating multiple temperature and pressure instruments.

What do you enjoy most about your work?

I started in field service with CalX and I love the variety of the sites and the processes that we get to see on a daily basis. I am currently working as a resident technician doing commissioning calibrations at WuXi in Dundalk. This involves a fair amount of fault finding and configuration. I come across calibrations I haven’t done previously and enjoy learning how to do them or finding ways to indirectly calibrate them.

We have an informal daily briefing first thing in the morning where we discuss any issues / outstanding calibrations from the previous day. We are then issued our workload for the day; this is generally an area or a skid covering every parameter, including analog and digital I/O, recording both local and HMI values including alarms and fault conditions. I can be pulled of my tasks quite frequently to fault find or provide product support for any team members.

CalX is a great place to work with a strong team both in the field and office. The support network is amazing with a real team culture. The constant investment in people and equipment really shines through. The craic on the nights out / company days out is always great with every team member being included.

What advice would you give to someone starting their career in instrumentation?

I never planned on a role in instrumentation but having an interest in how stuff works or how things are made, I find that it is a really varied and interesting career choice. The team at CalX will provide the knowledge and guide you towards the training required. The team members come from both college and apprenticeship routes which CalX have strong ties with.

Visit our Vacancies page for current opportunities in engineering roles at CalX or check out our FAQs page for answers to some of the most common question.

If you’re just starting out, visit our apprenticeships and college placements page.

A career in Instrumentation?

Check out our FAQs page >>

Stay up to date about future opportunities >>

This website uses cookies to improve your experience while you navigate through the website. Out of these, the cookies that are categorized as necessary are stored on your browser as they are essential for the working of basic functionalities of the website. We also use third-party cookies that help us analyze and understand how you use this website. These cookies will be stored in your browser only with your consent. You also have the option to opt-out of these cookies. But opting out of some of these cookies may affect your browsing experience.
Necessary Always Enabled
Necessary cookies are absolutely essential for the website to function properly. This category only includes cookies that ensures basic functionalities and security features of the website. These cookies do not store any personal information.
Non-necessary
Any cookies that may not be particularly necessary for the website to function and is used specifically to collect user personal data via analytics, ads, other embedded contents are termed as non-necessary cookies. It is mandatory to procure user consent prior to running these cookies on your website.
SAVE & ACCEPT